I want to create a grid of images on my homepage laid out as follows: 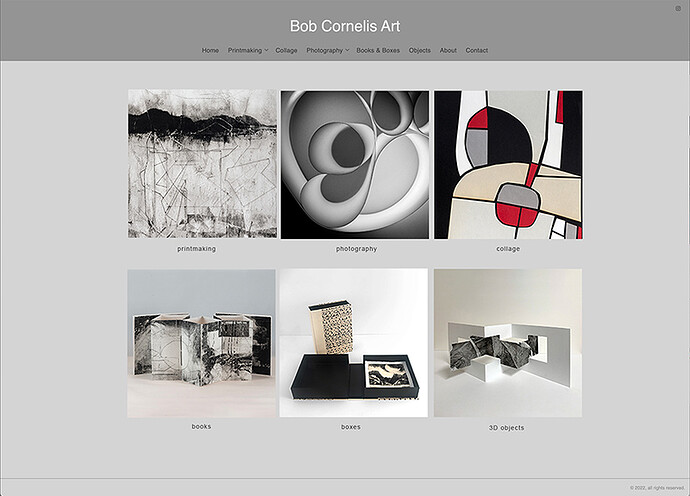 I want the rough proportion of the space on either side of the grid to the grid itself to be about what you see in the image. And I want the images very close to each other. Each image will be linked to a gallery.

I’d use the Responsive Grid feature built in to Backlight but, since it limits you to a 12 column grid and I have an odd number of columns (3 image, 2 borders), I can’t see how to group the columns to get close to the proportions I’m after.

Any suggestions as to an approach?

Can I just write my own HTML/CSS grid for this page, something with a different number of columns - such as 15 total, 3 for each image column and 2 for left of grid and 2 for right of grid?

Or is there a simpler or better approach?

I’m not sure I understand. I mean, the space on either side of the grid is going to be fully dependent upon the width of the visitor’s browser window, which varies wildly, depending on device, desktop organization, etc.

I completely understand your confusion and realize I either may not be articulating it properly or don’t understand something fundamental. I think this is why I referenced “proportions”.

I am little unclear how the grid function actually works (I assume the builtin responsive grid in Backlight is based on the standard CSS Grid feature). It breaks something up into x number of equally sized columns. Is it a specific number of pixels or the size of the browser window at any moment, or ??? I’ve always wondered if there is a parameter in Backlight where I specify the number of pixels in the width of a page. Is that “max-width” in the Layout portion of a template design?

Maybe the accurate way to state my requirement is to compare the relative size of the grid (width) to that of the navigation menu above it as I assume these things stay relative to each other regardless of browser window size (until you enter the responsive world).

You can still use the 12 column responsive grid, just use three “col_4” class divs inside a “grid_12” div.

Using the responsive grid framework in Backlight to layout text

I thought of that, Rod.

My concern is that the images will then be too large relative to the nav bar above. I want to be able to control that relationship for purely aesthetic reasons and it’s not clear how I could do that as well as maintain a specific distance between the 3 columns of the image grid (ie very little space in between as in my mockup).

Am I missing something that would enable that kind of control?

You can use more styling, like adding padding or margin.
you can limit the width of the overall content area (no need to use columns on either side just to contain the width).

Instead of width, I would use max-width. I would put the responsive grid inside another <div> that has the max-width applied to it.

@bobcornelis Actually, the album grid is NOT using CSS Grid. The grid is based on the content width that you provide in Layout options, with cells then being a percentage of that width. At breakpoints, defined using CSS @media rules for the screen’s max-width, those percentages are updated, again according to rules you’ve defined in the designer. So the factors are screen width and breakpoints, in which columns are a percentage of your layout width.

Pretty simple. Largely because Pangolin was put together before CSS Grid was widely supported.

Kookaburra is mostly the same, because I just don’t think CSS Grid is necessary for the way that we’re defined the album behavior.