VPS needed or not?

I just received this message from my web hosting service:

Our administrators have detected that the website regularly receives CPU faults and also I / O faults (see below).

It can be due to many reasons, malware / viruses / bots / unoptimized scripts / heavy images etc.

When these spikes occur, it means that your visitors cannot access the website properly (for example, they may experience huge load times or a complete inability to open the site). It also exhausts the system and can endanger other users.

In this regard, it is extremely important that we resolve the issue as soon as possible.

They go on suggesting I subscribe to a VPS at a much greater cost to me, as much as 4 times what I am paying.
Being self-taught (with a lot of help from Ben, Rod and Matthew), not only don’t I grasp fully what is happening, I don’t know what to do.

first make sure the email is actually from your host. I’ve gotten emails that were from “Bluehost” but looking at the actual email address, it had nothing to do with Bluehost. It was just a scam.

I checked, and it is really from my host. They’ve been “upgrading” my backup plan, twice in the last year and now this.

In the past, I’ve had several hosts attempt to upsell me into additional, prohibitively expensive services with similar messaging. Having had a sense of my website’s traffic, I believe they were trying to scam me, else I was being slammed with incomprehensible numbers of bots.

Consider what your website is: Backlight is lightweight, and you’re serving static images. You’re not running an enterprise application.

I would put some effort into optimizing your image sizes. As I’ve said before, I like to run my images through JPEGmini before uploading them to Backlight.

Beyond that, any additional effort I’d make would be in finding a better host.

The last time I had this issue with The Turning Gate, the host was trying to upsell me to a plan that would have cost me $150-200 USD per month. I moved the entire site to MediaTemple’s virtual dedicated servers for $50 and never had a problem again. After 10 years on MediaTemple, I did move last year to Linode hosting, and I’m paying far less than that. The tradeoff with Linode is that the server is self-managed, so I have to do EVERYTHING myself. I’ve had none of the issues previous hosts had claimed, though, which further leads me to believe they were trying to take me for a ride.

I will look into alternative web hosts, including those you have named.

I process all my images thru JPEGmini, at least since last year. I will revise does images uploaded before that. The site should be able to have thirty years of work (abridged), which should come to 2000 to 3000 images. It’s will be big and I expect that hosting for such a site might be expensive.

It may be naïve, but not knowing what size exactly is my site, I download the whole thing and used the WhatSize application to find out that it’s…2.75GB!

I don’t know if that’s considered large, but all the hosts I am looking at, start at 20GB.

Also, I ran a LIGHTHOUSE audit of the site and although there are some errors to be fixed, the report card for the site is very good.A similar report comes from WEB.DEV
https://lighthouse-dot-webdotdevsite.appspot.com//lh/html?url=https%3A%2F%2Fpideja.ca

I should be telling this to my web host, but I feel I need to get trusted support on this one.

Hope this doesn’t bother you too much.

Images add up, certainly. And Backlight generally has a good report card. The grading curve is best-case scenario, so where I’ve seen Backlight not get the very best scores are in areas where I expect it, based on what the product is, and how it needs to work for the user base.

Some of what affects end-user site performance should have negligible impact on the server performance. In particular image sizes. Even large JPEGs should not be a burden on a well-provisioned host.

In our experience supporting Backlight across multiple hosts, Backlight itself operates quickly and has a low impact across the vast majority of hosts. Backlight has been designed to be efficient, and provides layers of template and file caching. Being a dynamic CMS, Backlight does still require some processing overhead though. This overhead does not become apparent or cause issues unless the host has over-subscribed their servers. For example, a well-provisioned server could have a hundred sites on it and for the most part sit at 10% CPU usage. A visit to your site may cause the CPU to go up to 20% for a second. The law of averages says that the overall CPU capacity won’t be stretched across all of the sites hosted on the server. An under-provisioned server on the other hand might have 500 sites on similar hardware, and consistently run at 80-90% CPU usage. It wouldn’t take much of a spike in traffic to reach 100% CPU usage, in which case site visitors would experience slow loading times whether their site contributed significantly to the CPU usage or not. Sites that do incur processing overhead such as Backlight would suffer more from this lack of resources than static sites.(all figures made up for the point of explanation).

Thank you, Matthew and Ben,
As usual, you are a great help in my understanding of the problem and of Backlight itself. And I need all the help I can get.
All this business of upgrading at a tremendous rise in price as me worried.
As for the exceptions noted in Ben’s reply, in my mind the site will be big, containing +/- 3000 images. At the moment, only a “happy few” are aware of the site as it is not launched and publicized. I don’t even think I have more than a very few hits.
I would like to be done by the fall of 2022 and then make an announcement to whoever is interested in theatre scenography in Montreal on a french language site.
Frankly, I don’t expect large traffic.
So, I am awaiting a reply from my host and in the meantime, shopping around for an alternative host.

Your continuous help and availability are greatly appreciated.

To add to this, I received these error messages from my host this morning:

CPU resources limit was reached for your site
You have reached the entry processes (the number of simultaneously running php and cgi scripts, as well as cron jobs and shell sessions) limit 41 times

What does this mean?

I just Googled that error. Seems like you might be hitting resource limits.
Aren’t you also running other artist specific sites? Are they all running under the same hosting account?

Yes, I am running two other artist’s accounts. One is built with Backlight and the other is in WordPress.
That’s precisely what they are “hounding” me about. Looks like two of the sites I am running are exceeding the usage limits. Specifically, mine (pideja.ca) and the other Backlight site (lucnadeau.ca)
Two sites with relatively little trafic!

I ended up needing to upgrade my hosting account because I have several sites in subdomains plus several other subdomains for testing sites.

I don’t remember if it was a resource issue or simply because of the number of subdomains I had.

I’m still trying to make sens of this information: as suggested, I pulled the resource usage for the last seven days. I can see spikes from time to time, but I can’t figure out what is causing these.
Hope you don’t find me too insistant, but I am sending you that 7 day report. Maybe you can spot something… 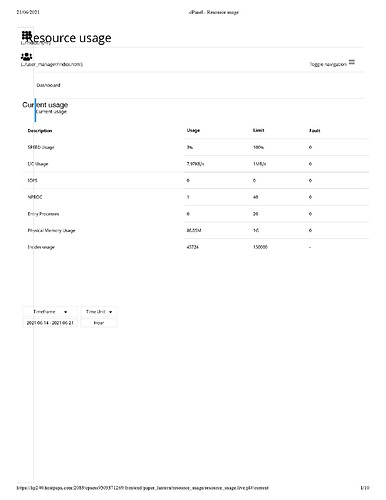 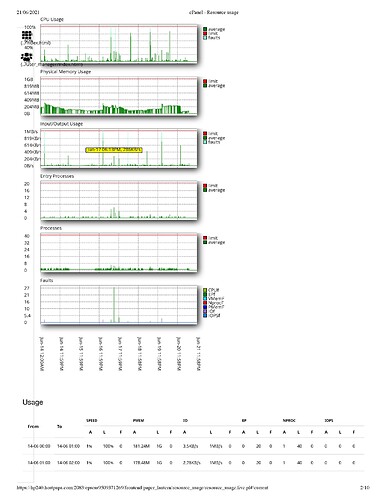 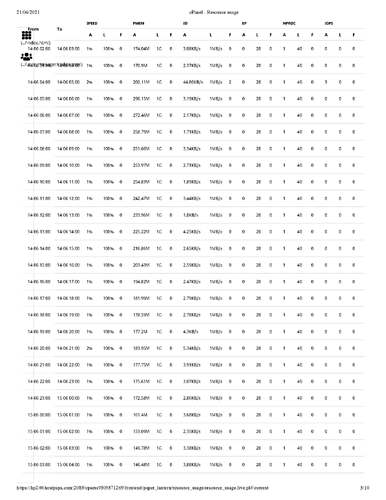 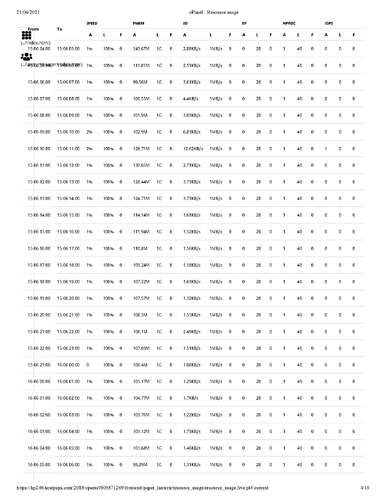 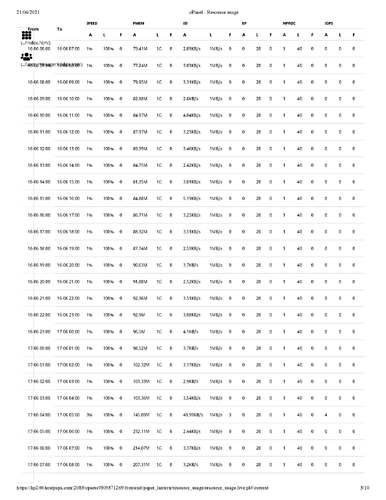 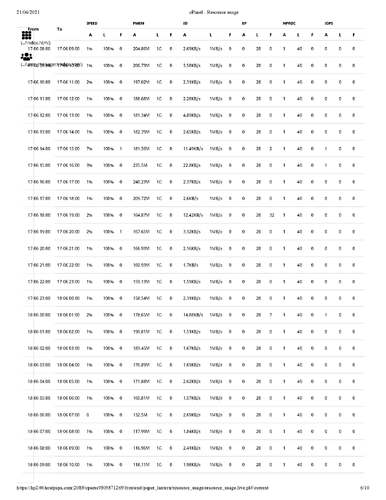 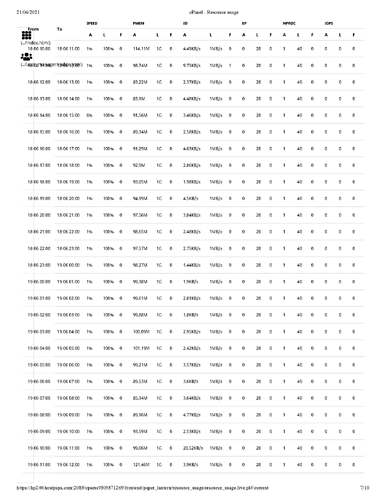 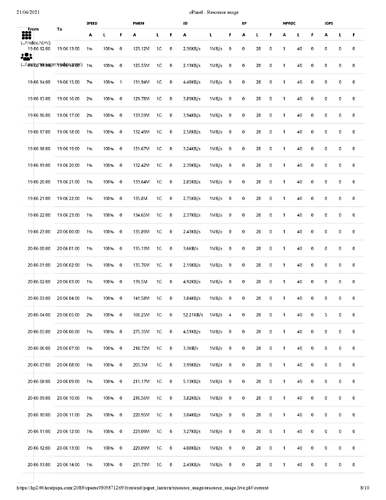 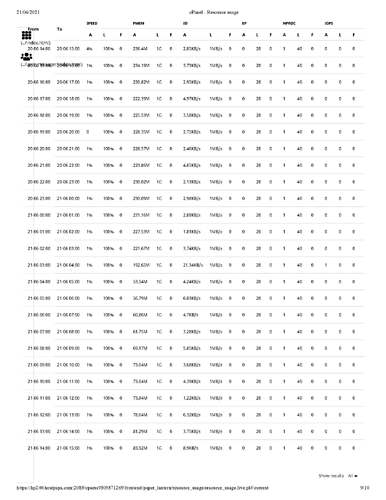 Feel free to look at this. I know it’s tedious, so if you do not want to go deep into this, I fully understand.